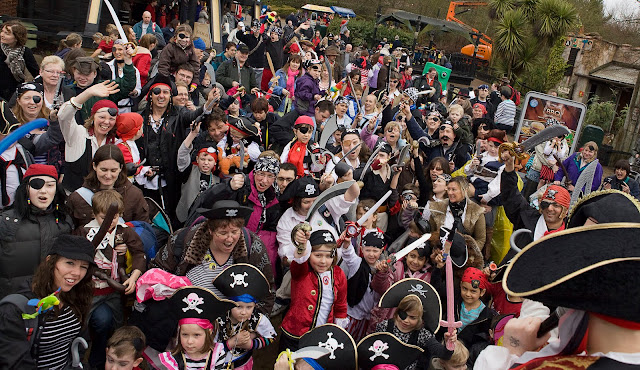 The number one family attraction was a sea of pirates with kids, parents and grandparents wearing their finest pirate costumes. Record breakers were accompanied by fighting swords and talking parrots to “AAARRRR” their way into the famous record breaking books.
Of the amazing effort, Guinness World Record spokesperson Amarilis Espinoza said; “It was a fantastic day at LEGOLAND Windsor – everyone who participated made such an effort with their pirate costumes. LEGOLAND Windsor was a sea of pirate hats, parrots, patches and peg legs.”
Sally Reynolds, Sales and Marketing Director at LEGOLAND Windsor said: “We wanted to do something extra special to launch Pirates Landing  and what better way than to bring together hundreds of LEGOLAND Windsor fans dressed up as pirates and attempt to set a new World Record.”

Pirates Landing is a brand new attraction opening at LEGOLAND Windsor, marking the park’s 15th season. Children can learn swashbuckling and seafaring skills at the Pirates Training Camp, then climb aboard the new Jolly Rocker swinging pirate ship – a huge unique LEGO Galleon – that swings to 18 metres high for the ride of their life.   For more information about LEGOLAND Windsor go to  www.legoland.co.uk/pirates or check out Legoland Windsor on ReallyKidFriendly.com to find out more about their excellent facilities for families with babies and young children.


Legoland Windsor was rated 4.5 stars (out of 5) by mums and dads. Click here to find out why!