We’re pleased to share some exciting news from those music-loving (and slightly kooky looking) islanders Zak, Tang, Panzee and Drum… better known as the ZingZillas. Their unique musical show on BBC Worldwide’s CBeebies has been a massive hit with young children, with each episode introducing a special musical guest and creation of an original song inspired by their guest. And now, on October 4th 2010, the ZingZillas will release their very first album, aptly named ZingZillas: The Album. 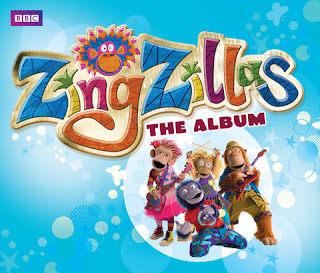 The album features 26 original tracks from an incredible array of musical genres, including pop, rock, flamenco, bluegrass, bhangra, and even opera. Far from your standard children’s CD, this is “proper” music, a remarkably grown-up introduction to a variety of styles, instruments, and compositions. The only thing that sets some of the better tracks apart from what you hear in the charts are the lyrics. Rather than singing about falling in or out of love, gorilla and lead singer Zak croons about friendship, cooperation, the pleasures of creating music and being in a band, and about picking up litter.

When our preview copy arrived in the post, we tore it open and cleared some space in the living room so we could dance around without any heads being bumped. M (aged 3.5, going on 14) actually knows the ZingZillas show and revelled in the opportunity to educate us all about which characters we resembled most, and which instruments we should be playing. She was of course Panzee because she is, in her own words, “the most beautiful and the most girly”.

Without obvious actions or recognisable nursery rhymes, the little one (aged 2) was a little lost, but still happy to be bossed around by his big sister and duly pretended to be Tang and strum his ‘guitar’ (a lemon yellow ukulele) as per her orders.Their favourites by a mile were Do you Didgeridoo, Bhangra Beat, Boogie Woogie Bubbly Time and Litter, Litter, Litter. The lack of visual cues pushes the suitable ages for this album up a little – while the show itself suits preschoolers, we felt that most of the songs on the ZingZillas album would appeal more to slightly older children, probably from age 4 upwards.

The show works so well because (aside from loveable characters) there is a solid narrative holding each episode together, gradually introducing the musical styles and the instruments, and culminating with a song. Without that narrative, listening to such an eclectic mix of music all in one go felt a little disjointed; there simply is no obvious segue from scat to opera.

That said, it’s not designed to be background music – this sort of album is designed to be enjoyed, actively listened to, and to provide the backdrop for some fun music-inspired imaginative play. We’d recommend you dig out all the random little instruments the kids have received over the years as presents, or spend the afternoon making homemade musical instruments (empty bisto jars part-filled with lentils or rice make for great shakers), warm up your voices with some silly yodelling, and switch the ZingZillas CD on. You’ll soon find that the kids are asking all about didgeridoos, and rocking out with their very first air guitar. You can even get the kids to dress up and put on a show while you sit back with a cup of tea.

Good fun for the whole family, and worth a listen.
Click here to pre-order the album