What good is there in planning all these great days out and coffee mornings if your toddler won’t even budge from the sofa, insists on going out in the cold wearing pyjamas, or has a meltdown every time you try and do something nice together? If you’ve ever felt like tearing your hair out thanks to a willful little toddler, then we dare say you’ll appreciate these tips from Here2Maternity‘s Jay Marie.  If you haven’t then you probably don’t have kids!

The Terrible Twos:  A strategy that works!
by Jay Marie (Here2Maternity.co.uk)

Is your toddler refusing to get dressed or refusing to leave somewhere when you want them to? Are you struggling to get them into the car or out of the car? What about their eating habits have they suddenly decided that eating is not on their agenda, even their favourite meal? These are just some of the common changes parents are suddenly faced with after their toddler turns two.

Does the sound of ‘the terrible twos’ make you quake in your boots? That dreadful time you’ve heard so many parents warn you about when your little angel becomes a little devil. The time when their favourite word becomes “No”, they hit, they stomp, they refuse everything and it seems as though they do everything they can to annoy you, especially at the most inopportune times.

What if I told you that it’s easier than your you thought? That you can stop quaking in your boots and instead embrace it, knowing that it won’t be much different from the last two years.

The ‘terrible twos’ describes the passage that toddlers take (on average) between the ages of 2 to 3 years old. Some are earlier starters, some a little later and some head on into 4 and 5 years old with the same ‘label’.

The ‘terrible twos’ label is just that, a label. You see if you really think about it, the problem with the label ‘the terrible twos’ is that it’s saying – this whole year is going to be terrible and that your child’s behaviour is terrible and awful. And yet, if you put your mind to it, that isn’t really true because in reality its probably only a tiny fraction of that time in which their behaviour is less than what we would like.

Its not that it’s the terrible twos, or that perhaps we should instead try and call it the happy twos, it’s more about being able to experience our child’s behaviour from their point of view. Why? Because this is what they are going through. It’s their world as they know it. Yet without realising it we expect them to view it as we see it. They are no longer little babies, they are little people and sometimes the transition between the two happens so fast that our expectations on them become too great, too quick. Limited though it is, its their world that they occupy where they don’t have access to all that we as adults have learnt. They don’t have the benefit of our years of experience, knowledge and social understanding and they are learning an incredible amount all in one year!

So what is it really? It most definitely isn’t them becoming terrible little people. According to Tessa Livingstone in Child Of Our Time: Early Learning, it is thought to be the biggest growth spurt of our lives: mentally, emotionally and physically.

To be an effective teacher and ensure we cope well through what some term as the most challenging year of our lives we need to step up the gears as our toddlers are becoming little people. Little people who now understand choice. They understand ‘yes’ and ‘no’. They know what they like and are learning more about what they don’t like.

When you understand the emotional growth toddlers experience during this phase of development you can see life through their eyes and respond more appropriately to what is going on. Emotions run hot at this age and they are learning lots of them. From happy and sad, to angry and even fear. It’s the same with their mental and physical growth.

Understanding a fraction of what your toddler is going through is one of the most important coping strategies you can have. You need to see it from their eyes because you then have a new point of view, their point of view. Instead of seeing a tantrum you see the frustration of experiencing an emotion that can’t be communicated.

Once you understand the psychology behind what your toddler is experiencing during the ‘terrible twos’, you understand what it is they are doing; you see that saying ‘no’ all the time in actual fact is sometimes ‘yes’ and sometimes said for the fun of it. Naturally you will have a greater chance in helping them respond to new behaviours and new experiences. It gives you the power to recognise what truly may be ‘bad’ behaviour or what is really simply them learning; trying to understand the natural course of action and reaction. This in turn helps you to respond in a much more appropriate way to get a much better result.

A great example of this is the following:

After two years of dressing my toddler it suddenly become a battle. Kicking, screaming and yelling. I was then constantly late to all our play dates. No amount of bribing her that we wouldn’t go to messy play or the local indoor play centre if she wouldn’t get dressed worked. Even the threat of losing her favourite toy wouldn’t work as she does not understand the concept. The worst was when we were running so late that I decided to it was pointless leaving and stayed home. Not only did she miss out, but I did too. However by seeing it from her point of view I learnt that it is was more about ‘sudden change’ than it was about getting out of her pajamas and putting clothes on; She did not like the sudden disruption in what she was doing. She felt annoyed unable to understand why she needed to get dressed. From her point of view she was happily watching Peppa Pig and was quite happy to turn up to messy play in her P.J’s. It’s a bit like you reading this now then all of sudden someone comes and snatches your laptop off you and tells you to go and sit at the dining table.

So what can you do next time your toddler refuses to get in the car or refuses to leave the play centre? Understanding what goes on behind the scenes of their behaviour and knowing what they are learning is your biggest strength however a little piece of advice…

Warn them. Disrupt their concentration and ‘plant a seed’.

I understood that I could no longer expect her to do things when I wanted her to do them, just because I wanted her to do them, now! She needed warming up to the idea so that the sudden change wasn’t such a shock. You may have heard other parents warning their children with things like “you’re up to bed after this” or “one more book then it’s bed time”. I have even heard it when I am out and about at the local play centre – Mums, warning the little ones that they are ‘going soon’. This is a wonderful way of subtly breaking your toddler’s concentration and ‘planting the seed’ of what they are about to do. You are in effect warning them that ‘this’ will happen after ‘that’. Then
it isn’t such a shock when you come to do it. So next time you need to get your toddler in the car, let them know well before hand that your ‘going out to the shops soon’. And repeat it a few times, make up a great story about what your about to do. Distract them with the new thought.

So over the course of five or ten minutes before you plan to do what ever it is that is causing upset with your toddler let them know several times before hand. Warn them. Create a little story about what your about to do while you busy getting ready. 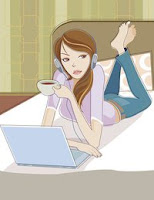 Jay Marie is a 30-something mother of a two year old girl, and is passionate about early childhood development. Between them, she and her husband have 28 years of experience in Neuro Linguistic Programming (NLP) and believe that NLP can offer invaluable parenting tools.

For more articles like this and for her musings on life with a toddler, read Jay Marie’s blog at Here2Maternity.co.uk.