There is nothing that can strike fear into the hearts of parents and random passers-by quite like the toddler tantrum. By the time you catch sight of the look of anguish on your child’s face, you’ll be gritting your teeth in anticipation, casting your eyes about for an escape route, and pleading to rewind the past few seconds of your life so you can undo whatever awful thing you did to trigger the tantrum. Which was, of course, to dare to give him his juice in the orange beaker instead of the green one. Or perhaps it was to unlock the door yourself, forgetting that your toddler likes to first jam the key repeatedly against the paintwork in some crazy “I helping Mummy!” manner. Or was it because you gave her an orange at snack time and “peeled it wrong”?

For those of us who were stupid blessed enough to have two children close in age, the toddler tantrums seem to increase exponentially. Thankfully we are too tired to react with any degree of sanity and instead sit in the corner and wring our hands wondering whether any boarding schools will accept children as young as two.

Joking aside, tantrums are something every child goes through. At this age, it’s unlikely your little one is throwing what is known as a “Little Nero” tantrum*, able to verbalise his or her needs and having the wherewithal to tantrum as a way of getting your attention – you wouldn’t normally see this behaviour until your child is a little older. The toddler tantrums that are reducing  1 in 5 mums to tears on a regular basis are almost certainly an expression of genuine distress over a situation that to us, with our years and years of experience, seems like a trivial thing. As parents we need to arm ourselves with as many tools as we can to help our children feel more in control of their world, and to show that we understand how difficult things can be when you’re little. 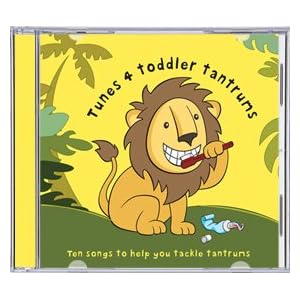 With all this in mind, we asked if we could review Tunes 4 Toddler Tantrums, a new 10-track CD which promises to help you tackle tantrums. At first glance, it looks very promising indeed – the music is composed by Victoria Arlidge, who writes music for TV and theatre, including writing the music for 240 children’s programmes, and has two BAFTA nominations and an Emmy nomination. Talent aside, Victoria is a mum of two young children and has first hand experience of head-spinning back-arching ear-splitting toddler tantrums.

The songs themselves are lively but not too much so (the last thing you want it to over-stimulate the poor little tots), and they are surprisingly catchy. For the most part, the tunes have a familiar feel, and it’s easy to learn the words and join in with the song even by the second verse. We listened to it on a little playdate earlier in the week with two 3.5 year olds and two 2 year olds, and everyone (including the parents) really enjoyed it.

So how does it work?
I have to admit I was a little sceptical, and spent a good ten minutes playing the CD backwards (the joys of having a hubby who fancies himself a DJ), listening intently for a subliminal toddler-taming message. It then occurred to me that perhaps the message wasn’t hidden in the music itself but actually written on the album sleeve. … ah, yes. It would seem that the CD isn’t used to brainwash your unsuspecting child; rather the songs are there to help you get your child prepared for, involved in, and feeling in control of otherwise stressful situations.

Perhaps the best examples are Space Buggy and Boogie Woogie Buggy Train. How many times has your toddler hopped obediently into the buggy while you’re rushing to get out the door? Zero, right?

So I’ll rephrase that. In order to get your child into the buggy, do you resort to

A) the tried and tested Karate Chop Method
B) the Bribery By Grape-Juice-Sweetened Finger Food Technique  or
C) the Pin-Child-Down-With-Assorted-Limbs-While-Clipping-Him-In Octopus Hold?

In comparison, Victoria’s solution is pretty sweet. You listen to the two buggy-focused songs on the CD a few times, and sing them together, pretending to zoom around in your Space Buggy or Boogie Woogie Buggy Train. Pretty soon you both know them by heart. Next time you need to take him out in the buggy, you make a big production of the adventure on which you are about to embark, and ask him to choose whether he wants to travel by space buggy or buggy train, sing it while you clip him in and off you go.

It may sound too simple to be true, but it really does work, and here’s why:

Victoria applies a similar approach to mealtimes (Deep See Tea Party), brushing teeth (The Tooth Brushing Lion), and changing their nappy (Nappy Time!), as well as a few other situations that most parents of toddlers find stressful. Here’s proof that toddlers actually *can* get dressed to leave the house without throwing a strop:

It’s a shame she hasn’t written one yet to cope with the “peeling the orange wrong” situation I often find myself in, but otherwise the CD is a definite winner in our house, so I’m giving it a 5 out of 5.

*If you want to learn how to tell the difference between a Little Nero Tantrum and a Distress Tantrum, The Science of Parenting is a must-read.
For 1 entry into our next prize draw, tell us your trick for getting your toddler into the buggy, or tell us what you think about Tunes 4 Toddler Tantrums!