With Star Wars: The Force Awakens on absolutely everyone’s minds, what better way to celebrate than with a Star Wars party? Those kids of yours have got the most incredible imaginations, so it really doesn’t have to be pricey or complicated… Below you’ll find some stellar (see what we’ve done there?) Star Wars party ideas you can try at home for next to nothing, including a homemade Yoda Birthday Cake, some simple games to play in the garden, and some complete and utter silliness in the form of learning to growl like Chewbacca. 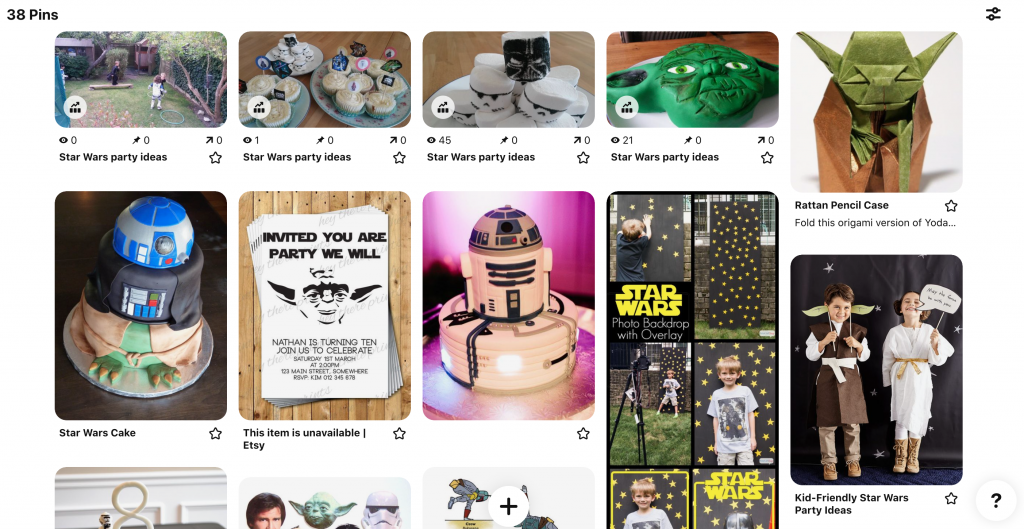 Our Star Wars party planning started with WAY too much time creating this Star Wars Party Pinterest Board, pinning our little socks off with ideas for R2D2 cakes, Yoda Origami, Star Wars party treats, and decorations to print or draw at home. What made it even more fun was sharing the board so we could collaborate with the lovely and oh-so-talented Irish artist Marjolein Wouters. There may have been some wine consumed during the process.

Make a Star Wars cake, you will. 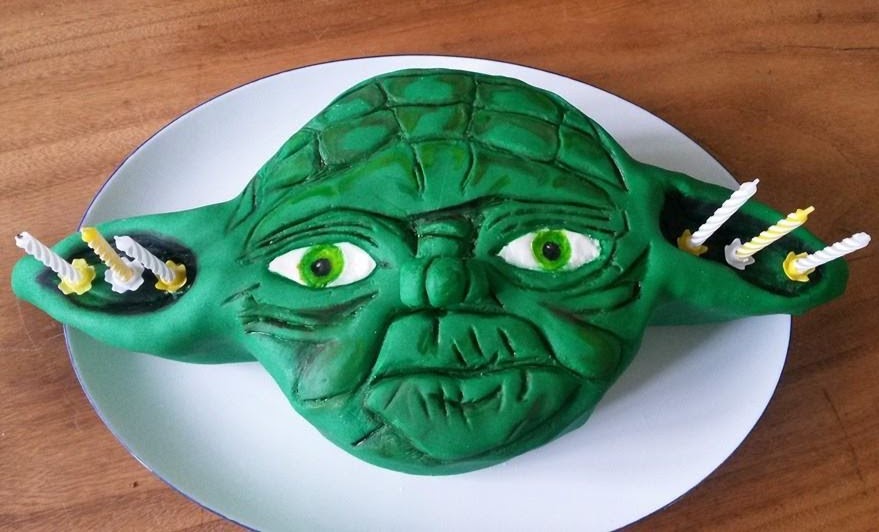 Making a Star Wars themed cake is easier than it sounds, especially if you ask Grandma to bake one and smooth out some ready-roll icing first 🙂

All you have to do is find some images on the web – black and white colouring sheets work best as they’re easiest to trace over.  Print them out, lay a sheet of wax paper on top, trace over them, then cut them out. Then, use them as stencils to cut some Star Wars shapes out of rolled icing, and stick them down onto the cake with a bit of water.

Instead of keeping things simple, Marjolein got all over-excited about it and made a Yoda Cake.

We added in some neat little details to bring the whole thing together… for example, inviting friends to Danger Boy’s “Sith Birthday” rather than his 6th birthday. We printed Star Wars pictures out from the web to stick into cupcakes, and even sketched some Darth Vader and Stormtrooper faces onto marshmallows with edible black marker pens.

All of the snacks and activities had names plucked straight from the Star Wars movies, like “Use the Forks” and “wookie cookies” for the lunch table. We then downloaded and installed this free Star Jedi font, and used it in PowerPoint to make signs for the front door and to mark activity stations.

Train young Jedi to use the force with a Jedi Training Camp.

We came up with some really simple games to play in the garden, all with a Star Wars twist. First up, Escape the Death Star, where the kids had to try to escape the trampoline and make it around an obstacle course in the garden while 7-year old Stormtrooper Mads tried to catch them.

Next up, JEDI training camp. With the help of an overgrown bamboo, a few bricks and a plank of wood from Dad’s shed, we created a mini obstacle course where blindfolded kids had to use the Force to pick their way safely around Degoba and cross an invisible swamp. Safely across the other side, they had to use the force to levitate my (yes, my) Millenium Falcon. We’d tied the ship to clear fishing wire and looped it over a tree branch, with Dad surreptitiously holding the other end and pulling it down as they “levitated” the ship. Simple as that, but the kids were completely taken with it, and some still swear to this day that they levitated that ship for real.

Not much can compete with a whoopie cushion for getting a bunch of 6 year old boys laughing, but we switched the silliness up instead with this absolutely brilliant Chewbacca Sound Tutorial. We adults felt compelled to try it out a few times 😉

Next up, we played “Growl, Wookie, Growl”, our very own Star Wars themed version of classic Victorian parlour game “Squeak, Piggy, Squeak“. If you don’t know the game, this is one for pretty much every party so is worth having up your sleeve. We got the newly trained wookies to sit in a circle, while one child stood in the middle, blindfolded. He had to sit on one of the wookies and say “Growl, Wookie, Growl!”, prompting the wookie to make a noise like Chewbacca, and then guess who he was sitting on. I have to say, my many decades of wookie growling training came in pretty handy for the first time.

There you have it – a DIY Star Wars party for kids, one they will remember for life. You’re welcome 😉

If you have been living under a rock and somehow weren’t aware, Star Wars: The Force Awakens is out in cinemas this week – check out the Star Wars trailer here! We’ll also be creating and featuring the best ever Star Wars kahoots for you to play just in time for the movie’s much anticipated release.

Back to Top
Close